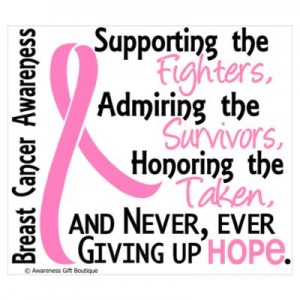 My mom has breast cancer. She was diagnosed in April 2015 and has since gone through 7 rounds of chemotherapy and had a mastectomy. I recently went with her to a radiation oncology appointment for an initial consult. After waiting for about an hour and a half, the doctor finally came in, and despite being so late, I appreciated his patience, attentiveness, and bedside manner. He took the time to explain the risks and benefits of radiation and what to expect. He spoke in a calm, gentle manner, answering all of my mom’s concerns and I could tell that he was good at what he did.

And then, knowing that my mother didn’t want to have radiation or any more treatment at all for that matter, I asked him: “Are there any other ways to prevent recurrence other than radiation?” to which he immediately responded, “None.” There was no pause, no room for discussion. I was silent after that. Being in Integrative Medicine, I knew better.

However, from a patient’s perspective, the moment he said, “None,” he had taken away our hope, our power. He put us in a position that felt like if we wanted to prevent recurrence, the only choice was to have radiation. The decision would be made out of fear and would also ask us to surrender to and trust an “expert,” a “specialist,” a stranger. He put us in what felt like a “lose-lose” situation. On one hand, of course we didn’t want the breast cancer to return. On the other hand, my mother didn’t want to have to go through radiation treatment.

I was upset, probably more so than my mother. Not because there were no other options (because there are), but because I was so deeply disappointed by the medical system that it hurt. It not only fails to take the opportunity to empower and motivate people but it in fact causes harm by stripping away hope at the most critical times. I didn’t blame the doctor. I understood the system he was trained in for I had trained in it myself. He seemed like a kind-hearted person with good intentions. However, he was not only unaware of the alternate possibilities, he was oblivious to how his words (and the execution of them) might affect his patients. To his credit, for what he knew, he was well-versed and a great doctor. Unfortunately, what he knew was limited.

This is only one example but it happens all the time in medicine and patient encounters. Who gives these people in white coats the power to take away our hope and independence? Who gives them the right to think they know what’s best for our own bodies? Weeks after the appointment, as I was still exploring my feelings and pondering these questions, the answer came.  It’s us. WE let physicians and other medical practitioners take our power away. WE as a society have put them on a pedestal, letting them tell us what’s wrong with our health and what to do about it. We have put so much faith and trust in doctors that we fail to believe in ourselves anymore. Sure, they may have gone to school longer than we have, and they may have more training than we do, but does that mean they know OUR bodies better that we do? We, after all, are with our bodies 24/7 and the physician may only see it for 15 minutes, if that.

And so I invite you to reclaim your power. This is not to advise you against seeing a medical practitioner. On the contrary, take the opportunity to learn from their vast knowledge, expertise, and experience, and use medicine when appropriate. But do your own research, too.  Then, taking everything into consideration, tap into your own body’s awareness and inner wisdom to guide yourself in making the choices that are best for you and your health. Believe in yourself and there is always hope.

If you need help tapping in to your inner wisdom or would like to learn more about how to do so, contact me for a consultation.